One of our latest projects. A smallish one as we want to Join in With The Rochester seige as the Magna Carta is coming to Rochester cathedral as it is the 800th anniversary. We learned about Gods and Godesses, Eyptian life, clothing, Mumification process and funerals. Papayrus and The toys they played with, we also made some 2d to 3d Pyramids, atteneded a mummy workshop (alas no pictures of that) and later made a sarcophagus out of an old cola bottle. And Lukes practicing his writing.

Books read and enjoyed where 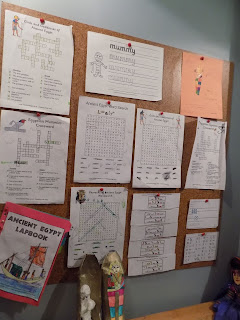