My lads love hands on experiments. I saw a course on Future learn and we have been doing the course together. Today we finished the first experiment. But we also Padded it out a bit more. Instead of Just the experiment we also used estimation, Descriptions of The potatoes before and after, using all of our senses. We also weighed out the lost water weight into a glass to visually show how much was lost.

Firstly we obtained two potatoes of same weight. One we kept to one side, The other wee microwaved for 10 minutes, stopping at every minute, to take out and weigh it, Did it weigh more, less or the same. We noted the date, after each minuted microwaved. My eldest even noticed the reason it lost more weight between 2-3 minutes than 1-2 minutes was because the potato was cold when it went in so more likely to use more energy to heat up to cause steam. Where as at 2-3 minutes the potato was already warm then hot.  We noted before and after weights and noted the difference.

Lastly we Drew a line graph and plotted the weight/Time ,and then the little one wanted to see inside the now rock hard (and cooled of course)  potato, it kept us amused for almost 2 hours! 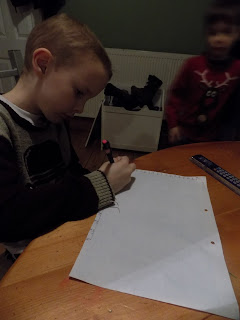 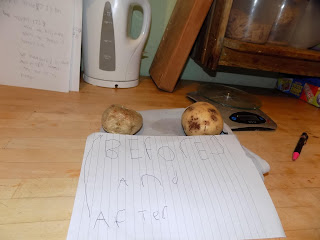